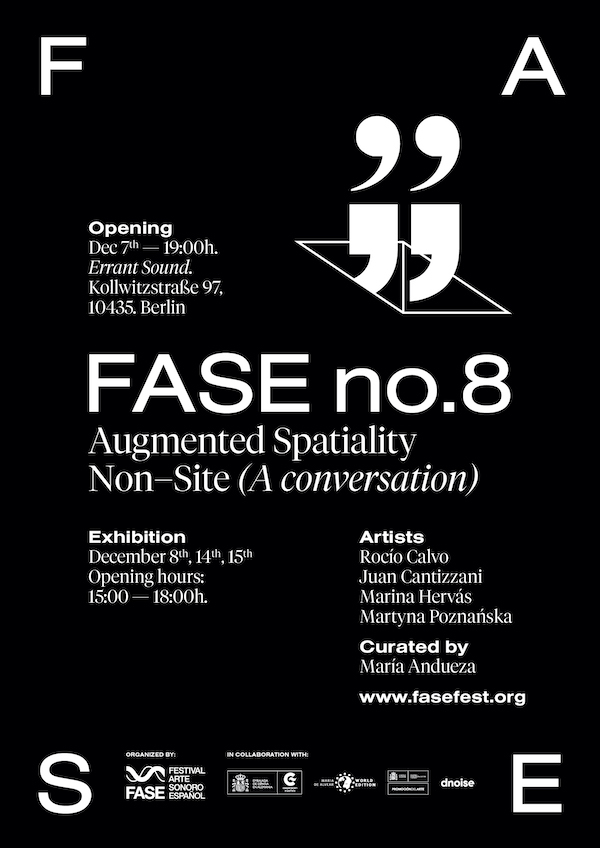 Sound is crucial in the definition of public space today. Through listening, sound stimulates participation in the territories we inhabit. Even if listening is unconscious for many, sound it is still affecting our bodies in our experience of a public space. By appearing and occupying unexpectedly a space, sound is able to create one of the temporary autonomous zones that Hakim Bey coined. This way sound appears as a tangible presence in the space that evades the structures as they are usually conceived and contests to the temporality and spatiality of the public. In these situations, considering sound beyond the hermeneutic listening brings into consideration sound as substance for community and communication.

Non-Site (A conversation) is a collective situation dealing with the public space in relation to the exhibition device. During the first week of FASE a group made up by Rocío Calvo, Juan Cantizzani, Marina Hervás and Martyna Poznańska will explore on the displacement of the concept of “public” in between the gallery of Errant Sound and the territory of Berlin.

Following the words by Robert Smithson, the proposal is conceived as “a non-trip to a site from a Non-site”. The work-in-progress during the week will consider and jointly explore, through sound interventions and documentation as living matter, the ways of appearing in and occupying out the urban and the exhibition space. Non-Site (A conversation) will be thus built up in the gallery out of the transition from the individual to the common and the round-trip paths between private and public condition.

Juan Cantizzani: By developing site-specific installations, live performances, curatorial or research projects, Juan Cantizzani explores on the dimension of listening and the role of subjectivity as elements of transformation. In 1999, he founded a social cultural organization called Weekend Proms expanding several programs like Sensxperiment, Andalucía_Soundscape, Educación y Escucha activa or MASE.
He studied music at the Conservatory of Lucena and got an Art Science Bachelor at the Royal Academy of Art and the Conservatory of The Hague (The Netherlands) 2008-2012. He has presented some of his works at different programs in Barcelona, The Hague, Berlin, Málaga, Brussels or Madrid.
https://juancantizzani.es/

Martyna Poznańska: Martyna Poznańska is a cross-disciplinary artist who works with different media across disciplines, building connections between the intangible medium of sound and solid matter. This includes the practice of listening and field recording in tangent to working with various visual tools such as drawing, video, mixed media, found objects, and writing.
She has exhibited and performed internationally in shows at the Akademie der Künste, Berlin (DE), Deutsche Oper, Berlin (DE), Aperto Raum Berlin, among others. In addition, she has worked with renowned artists such as Hans Peter Kuhn (Übergang, Martin-Gropius-Bau Museum, Berlin, 2017), and Peter Cusack. In 2013 she was a recipient of a grant from the Polish Ministry of Culture. Martyna completed a master’s degree in Spanish Language and Literature at Jagiellonian University in Krakow, Poland. She studied Sound Art at the University of the Arts, London (LCC/UAL). In 2016 she obtained an MA in Sound Studies at the Universität der Künste Berlin (UdK). Martyna lives and works in Berlin.
https://www.martynapoznanska.com

Rocío Calvo is a radio artist and co-founder with the musician Fernando Vega of the Sensorimétrica project. Coming from literature and the scene. His works focus on writing and sound dramaturgies and have been recognized, awarded and broadcast by major radio stations in Spain as exhibited on stages and stations also in the United Kingdom, Germany, Argentina, Paraguay and Mexico. As a creator, she follows the trail of the experimenters of writing and works on the transmission and writing that is not written through the voice.  https://rociocalvo.wordpress.com/

Marina Hervás holds a degree in Philosophy and in History and Music Sciences and PhD in Philosophy. He has developed his research at the Institute of Social Research (Frankfurt) and at the Academy of Arts (Berlin). She is currently a professor at the Miguel de Cervantes University and the Madrid Film School. It develops, in parallel, freelance projects in festivals, media and cultural institutions. http://marinahervas.com/

María Andueza develops as an artist and researcher her work in education, diffusion and creation projects of diverse nature. She holds a PhD from the Complutense University of Madrid and works at the Reina Sofía Museum Radio. Since 2013, she coordinates the Augmented Spatiality project on sound creation and the public space. http://mariaandueza.org