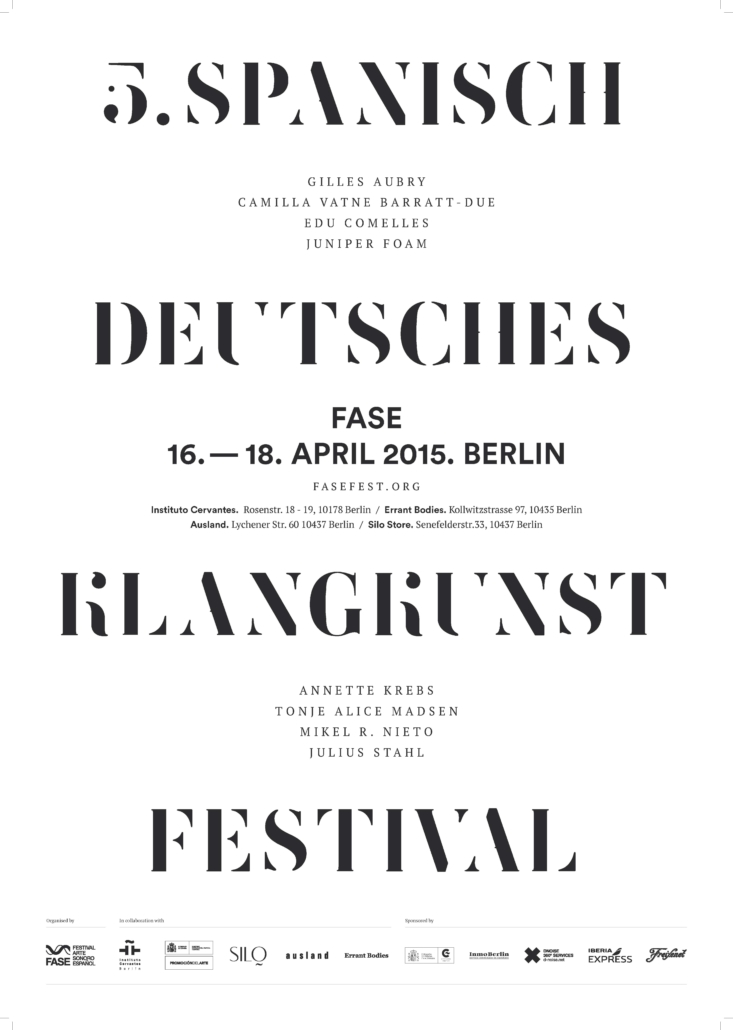 In this 5th edition, FASE wants to go head in quality and relevance. Thus, the work selection will be led by an independent and international Advisory Committee composed by a selected group of artist and academics. It is formed by Alex Arteaga, Ricardo Atienza, Lluís Nacenta, Volker Straebel and Salomé Voegelin. The public call will be divided into two participation categories: for emergent artists and art scholars and for established artists.

Relating the issue of FASE 2015, the current edition is focused on the own image of sound art. The matter for this year deals with the own conception of sound art work in such a manner that results intentionally ambiguous and self-referred. In this way, presented works should tackle the own notion of the sound art creation throughout the qualities o limitations of their genders and means. They would be self-referred in the sense of not making reference to concepts, objects o discourses, beyond of their scope of production, presentation and reception. They must be pure or abstract, and they will imply its preceptor. They can be art by art, they can be art about art.

FASE 2015 will take place in Berlin, in three different spaces: Instituto Cervantes de Berlin, Ausland Berlin y Errant Bodies, all of them art spaces of reference in this discipline. 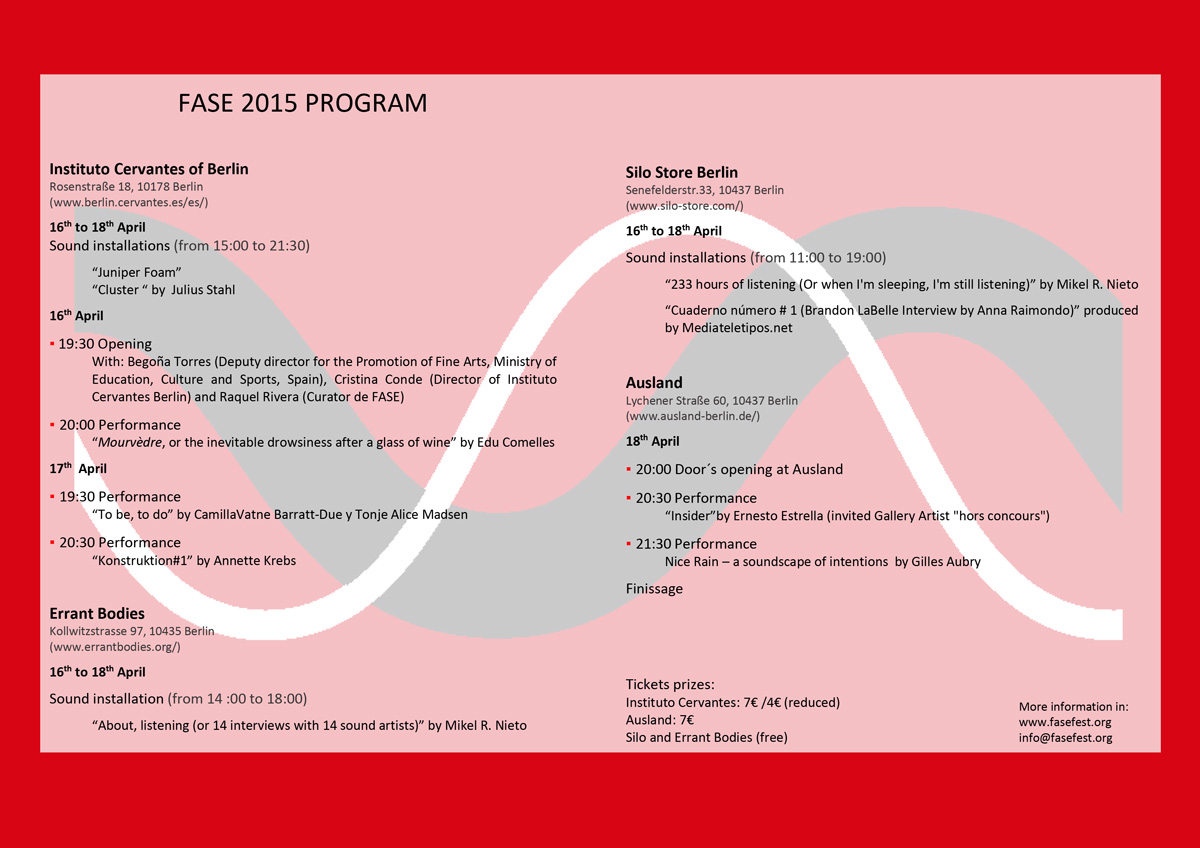 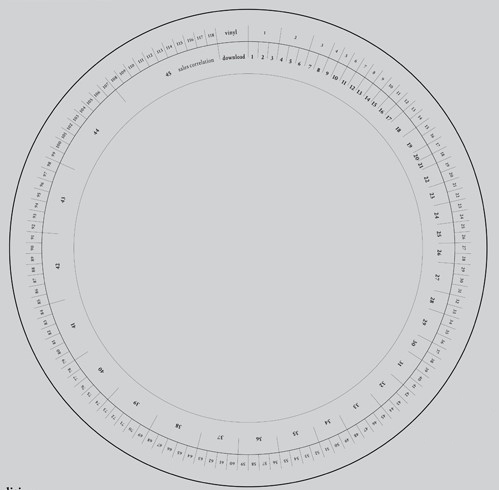 Gary Schultz was born in Birch Run, Michigan, in 1982. He studied at the University of Michigan, Ann Arbor (2000-5), the Center for the Creation of Music: Iannis Xenakis in Paris (2005-6), and the California Institute of the Arts in Los Angeles (2008-10), where he received an MFA in Experimental Sound Practices. Schultz’s work combines elements of music, conceptual art and curating. It draws on a range of materials—including economics, distribution, intonation, writing, sound and video—in order to foster a dialogue between the experimental and the popular. He was a research scholar at the University of Art’s Graduate School of Arts and Sciences in Berlin from 2011-13, during which time he founded the label Care Of Editions. He lives and works in Berlin.

Juniper Foam is an album released as a background noise app. Drawing from a collection of audio tracks, the default playback mode is performed on auto pilot: shuffling between different combinations of sounds without a strict sense of pattern. This creates a perpetual mix between a range of background sounds, from various shades of noise and field recordings to more tonal textures, as well as some musical figures that are like reminders of the album format. The installation form is a mockup where the album’s use and listenability can be previewed. Listeners are able to make minor adjustments to the overall flow by pausing the automatic shuffle, muting certain voices or triggering new, random ones. This means each track can be heard as a fragment or a self-standing composition.
By coding the app in HTML 5, the album’s distribution and configuration are voiced in the same language as the internet. It also shortcuts an inevitable process by which the playlist or shuffle functions that are now included in nearly all digital formats can cast any release in a background role. Given the potential turn towards presence, away from specific sounds, Juniper Foam proposes to flesh out these types of listening.
www.careof.co 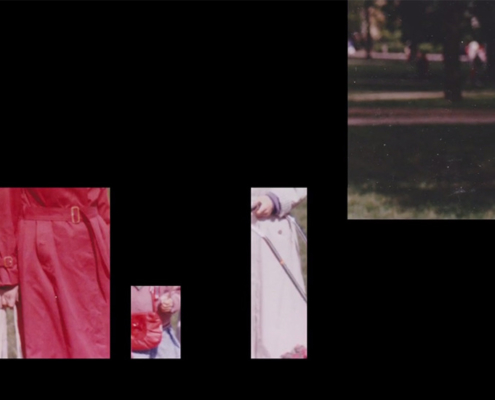 Camilla Vatne Barratt-Due (1984-Oslo, Norway). Lives and works in Berlin and Oslo. Performance artist, musician and composer, educated from The Royal Danish Academy of Music with classical accor­deon as her main instrument. She is currently a student at MA program for sound art at The Universi­ty of the Arts in Berlin. She works both with her own performances and as a composer with experience from a wide range film, theatre- and dance perfor­mances around Europe and Scandinavia.

Tonje Alice Madsen (1983- Bodo, Norway). Lives and works in Oslo. She received an MA from the Department for Time Based Media at the Royal Danish Academy of Fine Arts in Copenhagen, in 2011. She works independently and collaborative, mainly with the field of video art. Her recent works explore new forms of documentary and narration, often based on varieties of found footage. Her videos have been shown at international film- and video art festivals and exhibitions, among them lnterna­tional Film Film Festival Rotterdam, lmages Festival and Transmediale.

To be, to do is a silent movie performance consisting of three main elements; a silent movie based on stills, a live performance of accordion music, and a prologue read out loud. The project takes its starting point and performative cues from a private family album. The aim is to create an experience of intimacy – analogous to the documentation of lived life as it is transcribed in a private family photo album.
Original title: Å være, å gjøre | Duration: 30 minutes | Concept: Tonje Alice Madsen and Camilla Vatne Barratt-Due | Music and composition: Camilla Vatne Barratt-Due | Film and prologue: Tonje Alice Madsen
www.camillabarrattdue.com 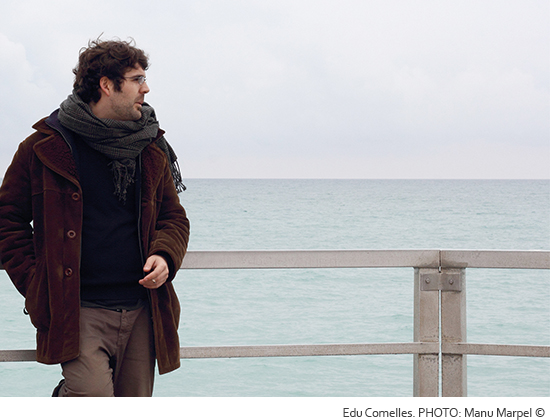 PhD in Fine Arts, MSc in Sound Design (Edinburgh University) MA in Visual and Media Arts from the Polytechnic University of Valencia. He is currently involved in several individual and collective artistic projects that come into direct relationship with the sound and composition.
His works have been published by labels such as Resting Bell (Berlin), Test Tube (Portugal), Impulsive Habitat (Portugal) or Audiotalaia (Spain). He has participated in festivals in Stockholm, Vienna, Madrid, Bristol, London, Valencia, including Sonar Festival in Barcelona and Radar UNAM in Mexico City. He is the founder and director of Audiotalaia a platform dedicated to the dissemination and production of experimental music in Spain.
Now a days, Comelles is developing a research project focused on means to show, display and exhibit Sound Art in a architectural context. This is happening at the Valencia Arts School.

Mourvèdre, or the inevitable drowsiness after a glass of wine.
Live performance / concert. Duration: 30-35 minutes (aprox.)
This concert take a very simple idea and expands it into a whole sonic universe. Mourvèdre its a sound work based in one single 1-minute sound file. The recording gathers the sound of rubbing the edge of a glass of wine. This short recording serves as the basis for a extensive compositional and improvisational work that explores musicality through slight pitch-shifting and sampling of the 1-minute sound file described. The approach despite being very minimalistic suddenly reveals a whole horizon of sonic encounters that through free improvisation expands in time creating a compositional web of symphonic proportions.
Finally Mourvèdre is gentle piece of music that seeks to explore the boundaries between sound art and ambient music and free improvisation squeezing the capabilities of a very short sound file and a very limited set of rules.
www.educomelles.com 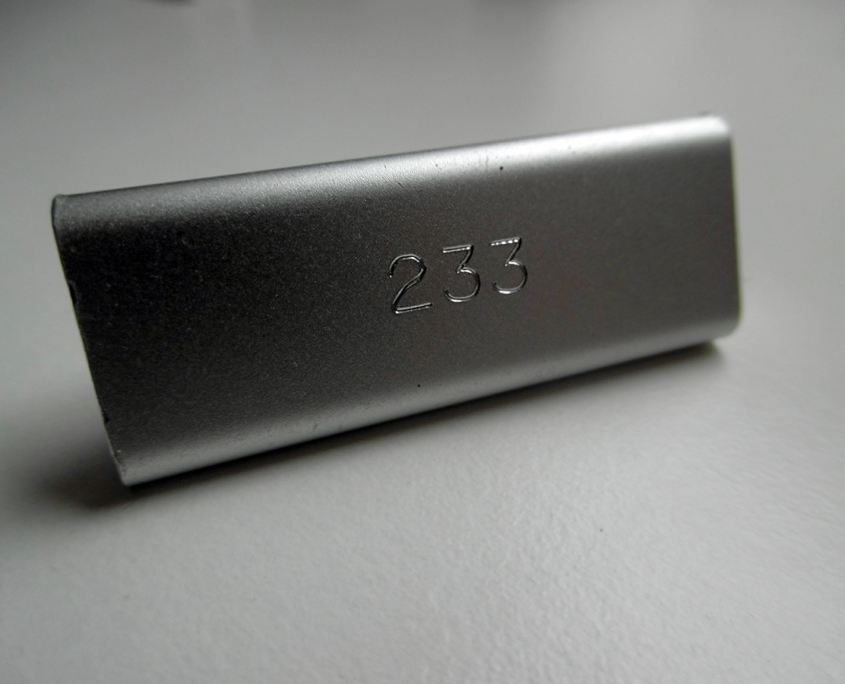 Born in Donostia, San Sebastián, Mikel studied art in San Sebastian, Madrid and Barcelona. For years has been immersed in the phonographic practice and theory that aims from it. He has taught workshops in different cultural centers and universities focused on sound art, field recordings, phonography, soundscape, improvisation and listening with different sound artist (Jean Luc-Guionnet, Slavek Kwi, Francisco López, Jana Winderen…). He is part of the team of sound map of the Basque Country,soinumapa.net, he co-coordinates Hots! Radio, and is a co-editor of the mediateletipos.net platform. 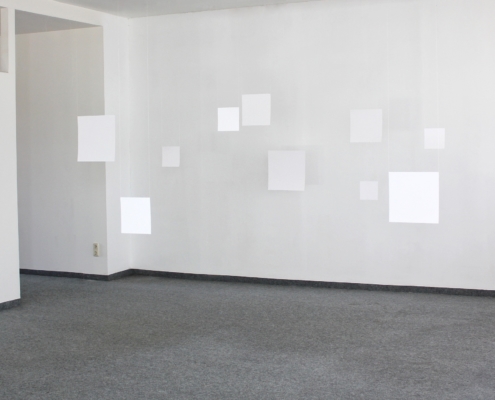 CLUSTER
(paper, perlon, pure tones, electronics)
The piece is part of a series of installations with paper. Pure tones become transferred onto 12 paper sheets hanging in the exhibition space. The resonances become visible as “standing waves“ in perlon threads leading to the papers. The papers are hanged at differing heights. Therefore they resonate at differing frequencies. When approaching the objects visitors discover acoustic spaces the papers are surrounded by. The installation is dedicated to the corporeality of sound as well as the the human body as part of the audible perception. Based on resonance the installation forms a spatial wickerwork in which Interferences of sensory spaces, between the audible and the visible, become connected.
www.juliusstahl.de 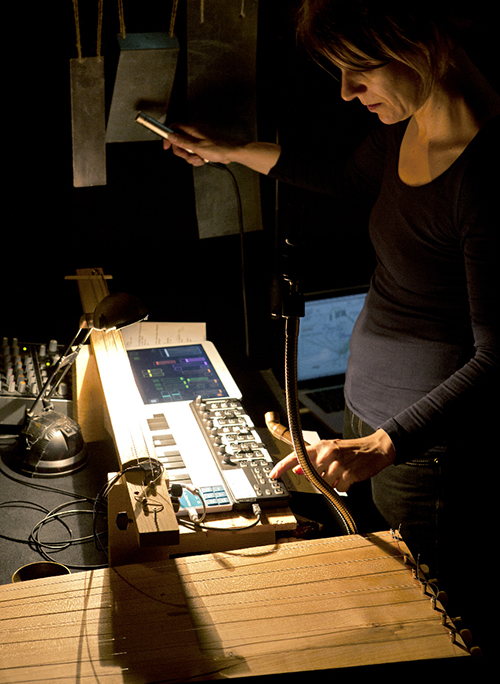 Annette Krebs has studied classical music in “Hochschule fur Musik und Darstellende Kunst Frankfurt am Main” and lives since 1993 in Berlin.
She developed her own musical language which is inspired and influenced among others by classical-, contemporary and improvised music and contemporary art .
She developed electro-acoustic compositions for loudspeakers, video and performance projects and collaborates with many musicians, composers and artists in and outside of Europe.

Konstruktion#1 is a sound sculpture, developed for the realization of the same-named solo composition.
The instrument consists of amplified metals, strings, wood, various objects and microphones. Konstruktion#1 combines techniques of electronic, instrumental and electro-acoustic composition and improvisation methods. It is conceptualized to be performed as a solo. It combines the sounds of the amplified metal pieces, bowed and strummed strings, objects, various oscillators and noise generators, amplified voice and taped voice in order to create a abstract sound-collage.
The motivation for this project is based on the aim to realize a musical idea without beeing influenced or restricted by the limitations of existing instruments– so this piece is not limited by a previously existing instrumental setup. The instrumental modules, its sound-colors and software are specially constructed in order to make hearable its sounds, which were at first abstract imaginations and visions.
www.annettekrebs.eu 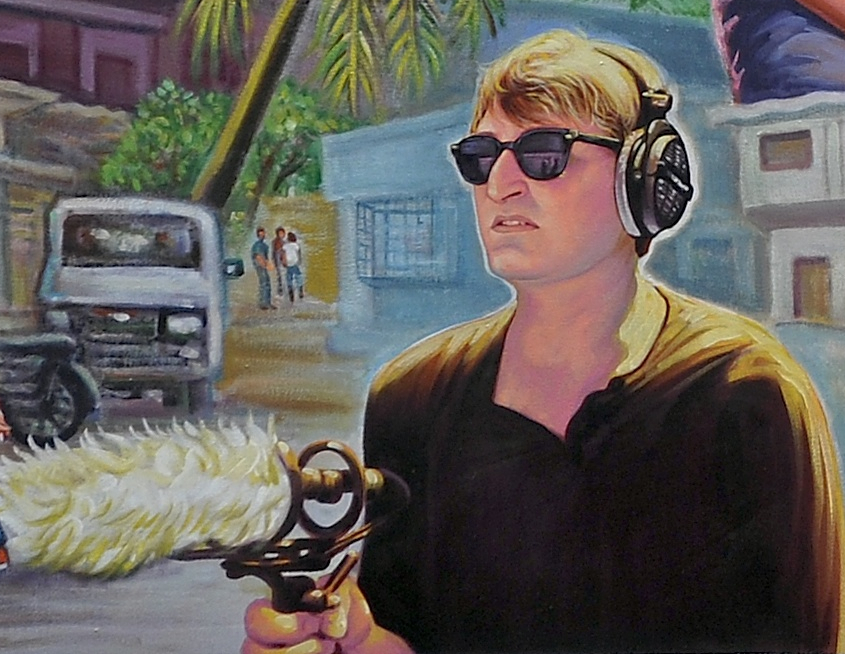 Born 1973, Gilles Aubry is a Swiss sound artist living in Berlin since 2002. His practice is based on an auditory approach of the real informed by researches on material, ideological and historical aspects of sound production. From 2010 to 2012, Aubry has been a guest artist of the Global Prayers research project. In 2013, he has been an artist-in-residence in Mumbai researching and documenting material aspects of sound production in the Bollywood film industry, which led to the realization of the movie Notes via Soundscape of Bollywood premiered at the Marseille International Documentary Film Festival 2014.

Nice Rain – a soundscape of intentions
Nice Rain – a soundscape of intentions presents itself as a reflexive soundscape composition. Rather than attempting to sonically depict an existing environment via sound recording as a ‘classic’ soundscape would do, this piece aims at focusing on the intentionality behind the recording itself by questioning the process and motivations that led to its making. Concretely, the piece consists in the playback of a field-recording composition over 2 to 4 loudspeakers, along with the live-reading of a text by the author of the piece. The soundscape composition is made of 24 field-recordings made in various places in Berlin, each one by a different sound recordist. The recordists are sound artists and anthropologists who have accepted to contribute to the project by providing one Berlin recording from their personal archive. The text is a composition by the author from the written answers by each of the recordist to the three following questions:
Why did you do this recording?
How did you do this recording?
In what ways does this recording represent your own listening experience?
www.earpolitics.net

Dear participants in the call for works, here we provide you the RESULTS OF FASE 2015 CALL

The quality and number of the proposals (nearly 50 applications) in the call for works for the 5th edition of this festival have made it very difficult for the advisory committee to select the list of artists. After two intense stages of shortlisting and votations, the committee has finally reached its decision (see here).

All the team of FASE wants to thank the participants for their contributions, which were of great quality.