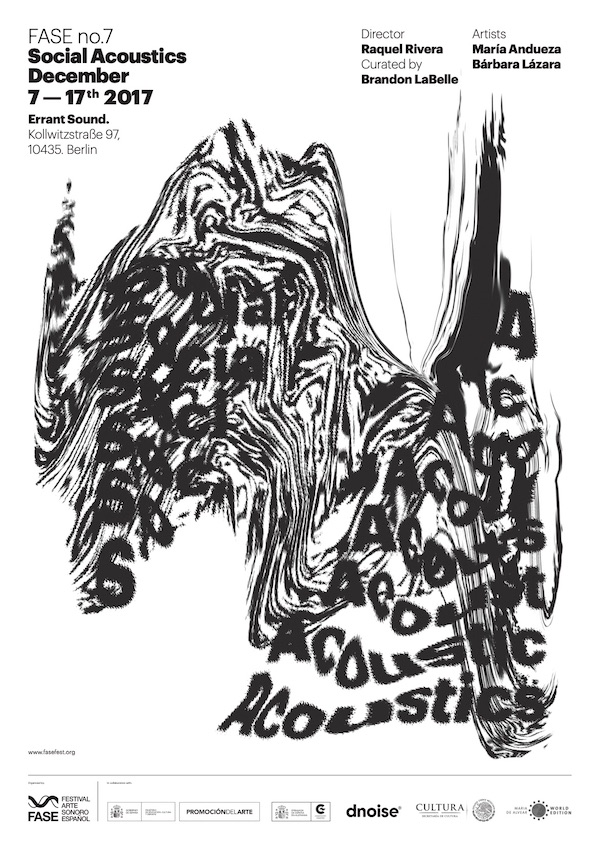 Sounds pass between and around, through and against, to shape and inflect the movements and conversations of daily life. As an energetic matter, sounds give animation to the material realities surrounding, while also traveling distances, relating us to horizons of imagination and social becoming. Sounds are unignorably relational, affording both escape routes from particular structures and also deep-rooted sharing. As Les Back states in his book, The Art of Listening, a “sociological listening” is needed to create a space for the excluded and the marginal, for those that do not always have a voice. This view may be extended beyond the confines of sociology, to recognize how listening is an everyday practice aligned with the ways in which friends and strangers may meet, and acts of hospitality as well as argument occur.

Social Acoustics focuses on the experiences and potentialities embedded in sound’s relational intensities. In particular, it considers the acoustics of environments as a potent medium for social transformation, and how particular practices work to agitate or reflect the tonalities of people and places. (Brandon LaBelle)

FASE 7 is based upon a specific curatorial concept articulated for FASE 6 in four steps. In the first part (December 2015 – January 2016), curated by Raquel Rivera, Alex Arteaga presented a sound installation and video in the “ESTUDIOS” space of Tabacalera (Spanish Ministry or Education, Culture, and Sports), complemented by a research seminar with the participation of Ana Garcia Varas, Lluís Nacenta and Maria Andueza. The second, third and fourth steps of this project are curated by Alex Arteaga himself. The second part, performed at the Berlin University of the Arts (November 4th and 5th, 2016), begin with a research seminar on the theoretical work of its two protagonists – Salome Voegelin and Brandon LaBelle – in collaboration with the MA Program of Sound Studies at the Berlin University of the Arts (UdK). The third action consisted in a short stay of the two researchers/ artists and the curator in Madrid in order to explore the spaces and the urban and institutional context in which develop the fourth part of the project will take place: Tabacalera (Spanish Ministry of Culture). Now, the artist-resesearcher Brandon LaBelle take the curatorial role, inviting two relevant voices of the international sound art scene: Bárbara Lázara (México) and María Andueza (Spain)

María Andueza Olmedo is an artist and researcher from Madrid. Ph.D by the Complutense University of Madrid (Spain). My artistic and research work deals on Public Sound Art. I am professionally devoted to educational, cultural and artistic projects such as the radio of the Reina Sofía Museum, the International University of La Rioja (Spain) where I am lecturer, or the design and running of projects and workshops on open creativity and interaction in collaboration with Abelardo Gil-Fournier. My artworks have been additionally presented in several venues in Europe and I have lectured and published in different venues and media. I am the initiator of the public art project ‘Augmented Spatiality‘ which was presented in Stockholm in 2013 and later on in Chile, in 2015, as part of Tsonami festival.

Barbara Lázara is a performer / vocal artist based in Mexico, Lázara focuses on the relation between body, voice and space using tools like choreography and natural corporeal resonances. Since 2009 Lázara creates performative pieces to activate the dichotomy between divine/animal she finds naturally expressed in the human voice. She has given solo performances and workshops in México and often performs in Europe in collaboration with stage and sound artists, such as Zbigniew Szumski, Simon Fujiwara, Naomi Rincon Gallardo amongst others. Her works have been released by Staaltape (GER), Volta (MEX), and Antenas Intervenciones (ECUADOR).

Brandon LaBelle is an artist, writer and theorist working with questions of social life and cultural agency, using sound, performance, text and sited constructions. He develops and presents artistic projects and performances within a range of international contexts, often working in public. This leads to interventions and performative installations, archival work, and micro-actions aimed at the sphere of the (un)common and the unlikely. He is also an active lecturer working with institutions around the world addressing questions of auditory culture, sonic and spatial arts, experimental media practices and the voice. Current research projects focus on voicing and choreographies of the mouth, sonic materiality and auditory knowledge, and the aesthetics and politics of invisibility. He is Professor at the Bergen Academy of Art and Design, Norway.